Los Angeles, CA. – Rachel Pyne says at times the sounds in her ears were deafening and inescapable. Her footsteps rumbled through her head like thunder, she could hear her heartbeat, her food digesting, and even the shifting of her eyes.

“It was crazy. I could hear my eyes swoosh around as I moved them back and forth,” said Pyne, “Like moving your hand in water.”

Along with the noises, Pyne also began to lose her balance and suffer debilitating dizziness and nausea. It wasn’t long until her symptoms affected every aspect of her life.

“I couldn’t even fall asleep. I would lie there and wish that my head would stop spinning,” she said. “It was just chaos in my ears.”

At the age of 27, Pyne, a photographer from Merrillville, IN, had developed a rare condition known as superior semicircular canal dehiscence, or SSCD.

“Basically, it’s a hole that develops between the inner ear and the brain,” explained Dr. Quinton Gopen, an ear surgeon at Ronald Reagan UCLA Medical Center. “That region of the inner ear has sealed compartments with little fluid chambers, and occasionally a hole will develop in the bone and allow for these problems to arise.”

Because SSCD is such a rare condition, affecting an estimated one person per half million, patients often see several doctors before receiving a correct diagnosis, if ever. Pyne was examined by at least nine doctors and specialists all over the country, most of whom attributed her symptoms to migraines.

“One doctor told me I was just going to have to live with it,” Pyne said. “That was devastating.”

According to Gopen, this type of misdiagnosis is not uncommon. “A lot of these patients are seeking psychiatric help because they’re just mentally worn out,” he said. “They can’t escape the condition and it really kind of grinds them down.”

Pyne had almost given up until she came across an online support group launched by a former patient of Gopen and his colleague, Dr. Isaac Yang, and learned about their approach to similar cases at UCLA.

“We went there and saw Dr. Gopen, and within 15 minutes he diagnosed me and said, ‘Absolutely we can do surgery.’ I was crying because I had been through so much,” Pyne said.

“Patients are relieved to learn that this situation has become routine to us,” said Yang, a UCLA neurosurgeon who partners with Gopen on each SSCD procedure. “Because we see a lot of these cases, we not only believe them when they say they can hear their eyeballs or neck muscles move, but we can help them.”

After five years of operating on SSCD patients together, Gopen and Yang have developed a minimally invasive surgical technique that patches the hole in the inner ear, restoring normal balance and hearing.

“Traditionally, you’d need to have a big middle fossa craniotomy,” said Yang. “That’s a type of surgery that requires a sizeable hole in your skull, which leaves a larger scar and requires a much longer recovery time.

“What we’re doing now is performing the entire operation in a hole the size of a dime. That allows these patients to get back to work and get back to their lives much sooner,” Yang said.

Before the operation begins, the surgeons use state-of-the-art technology to map the brain and determine precisely where to enter the skull.

“Our neuro-navigation system is like using GPS for the brain,” said Yang. “It’s like a heat-seeking missile that allows us to target that itty, bitty hole between the inner ear and the brain.”

“These holes are only a millimeter or two wide,” said Gopen. “That’s about the size of the hole in the tip of an ink pen, so we really need to be precise and know exactly where we’re going.”

Working in tandem, Yang, the neurosurgeon, opens the skull and lifts the brain, then Gopen, the ear surgeon, pinpoints the tiny hole in the inner ear bone and plugs it with an artificial filler called bone wax. The entire procedure lasts roughly 90 minutes, and results are usually instantaneous.

“As soon as I woke up from surgery I was like, ‘Oh, my gosh. It’s gone!’,” said Payne. “Looking back, I’m actually happy that so many doctors turned me away and told me they couldn’t help, because Dr. Gopen and Dr. Yang did. I’m just so thankful.” 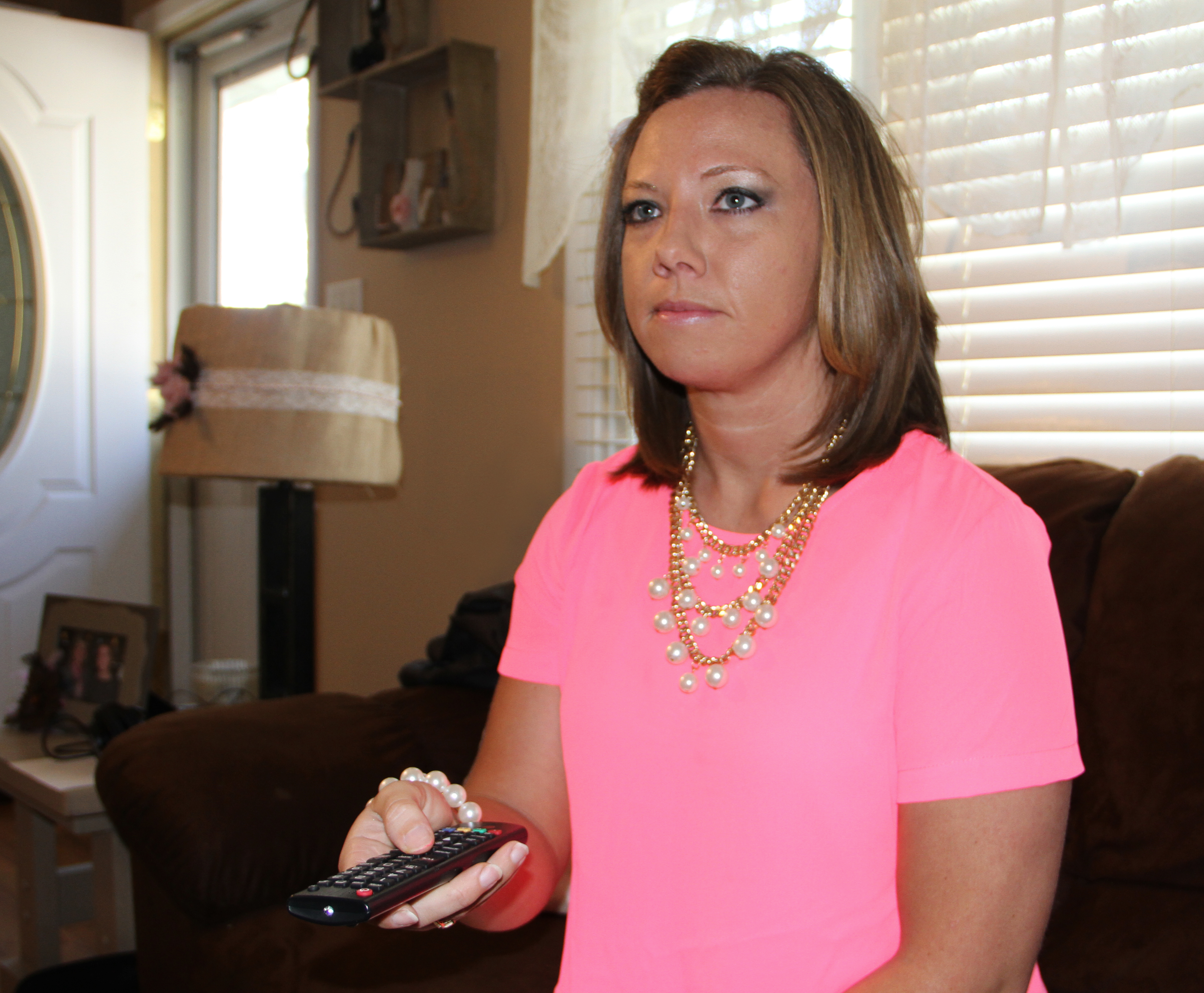 A rare condition left Rachel Pyne with dizzy spells and an extreme sensitivity to sound. Pyne not only struggled with noises like television volume, but could actually hear internal bodily functions like her heart beating and eyes moving. Surgeons at Ronald Reagan UCLA Medical Center diagnosed Pyne with tiny holes in her inner ears and performed high-tech surgery to repair them. To learn more about her condition and treatment, click here: http://bit.ly/1JvszJK 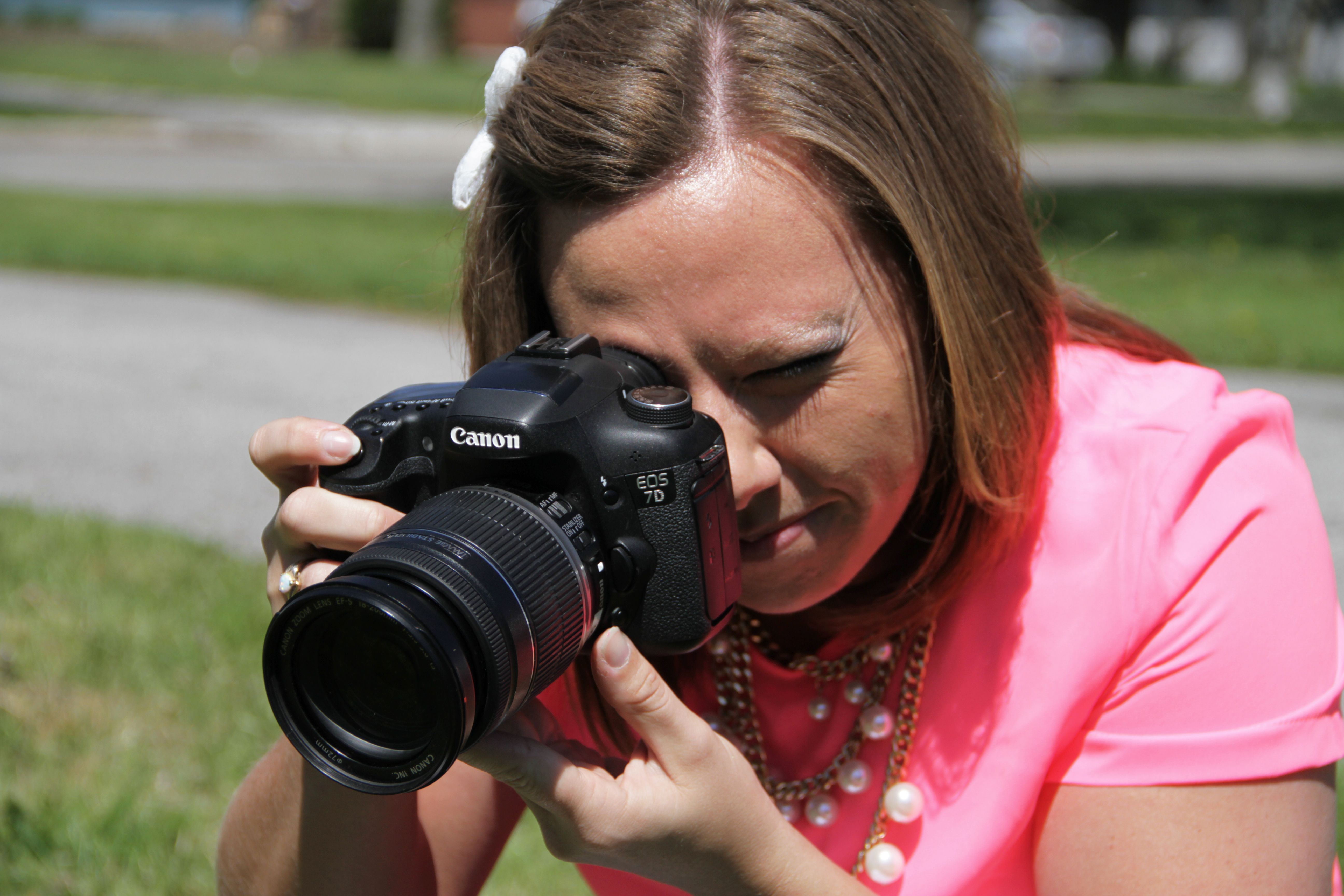 Rachel Pyne is back to work as a photographer after surgery to patch holes in her inner ears that left her dizzy and able to hear internal bodily functions. Pyne was tormented by the deafening sounds of her heart beating, food digesting and even her eyes moving. Doctors at Ronald Reagan UCLA Medical Center diagnosed Pyne with superior semicircular canal dehiscence and performed high-tech surgery to fix it. Details: http://bit.ly/1JvszJK 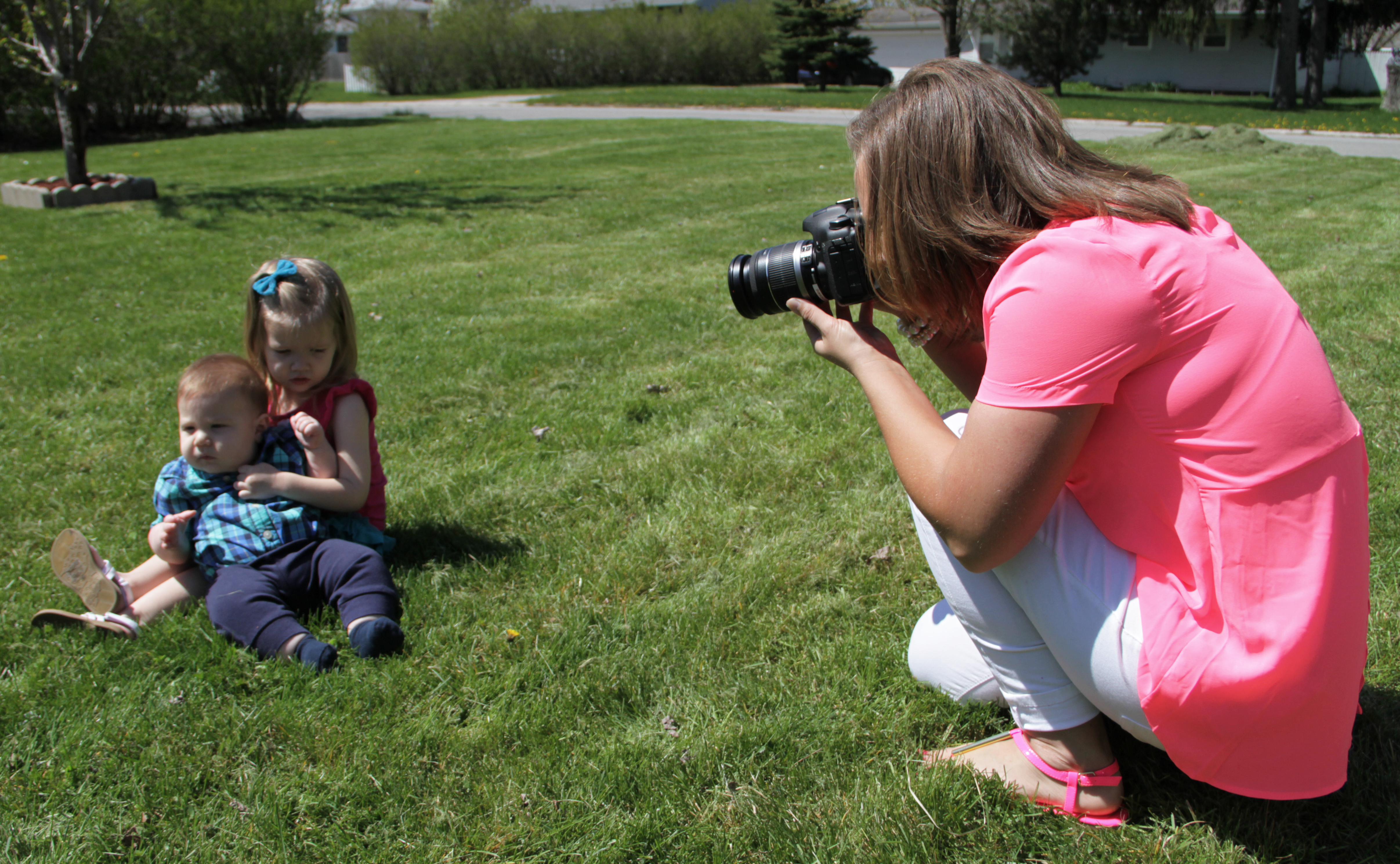 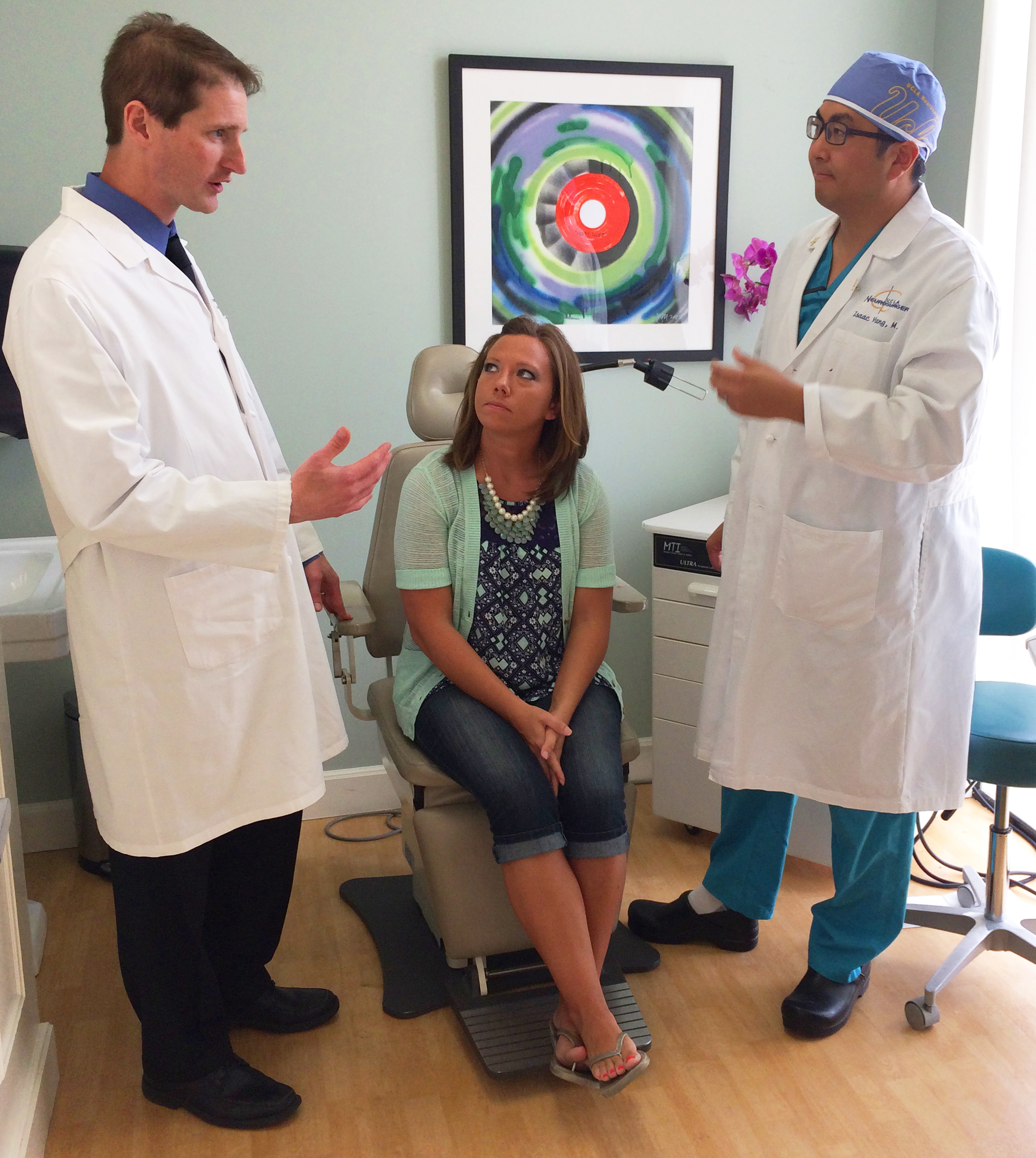 Dr. Quinton Gopen, left, and Dr. Isaac Yang consult with Rachel Pyne, of Merrillville, IN. Pyne recently underwent surgery at Ronald Reagan UCLA Medical Center to patch small holes between her inner ears and her brain, a condition called superior semicircular canal dehiscence. The rare condition forced Pyne to struggle with debilitating dizzy spells and the ability to hear internal bodily functions like her heart beating, food digesting and even her eyes moving. To see how the medical team at UCLA helped her get life back to normal, click here: http://bit.ly/1JvszJK 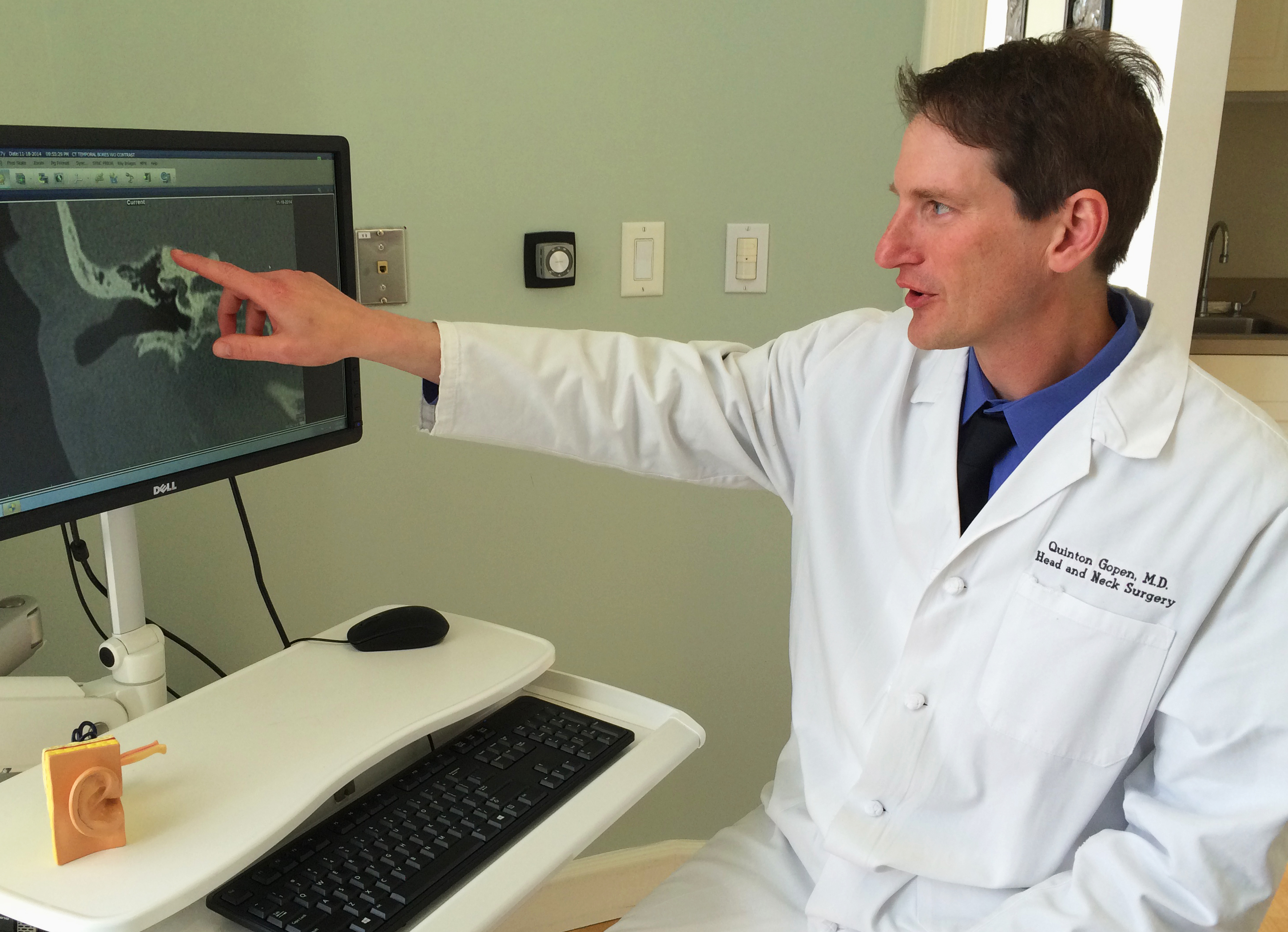 Dr. Quinton Gopen points out tiny holes that developed between the inner ear and the brain of a patient at Ronald Reagan UCLA Medical Center. The rare condition, known as superior semicircular canal dehiscence, causes dizziness in patients and leaves them with the ability to hear internal bodily functions. Many patients can`t escape the sounds of their hearts beating, food digesting and even their eyes moving. See how an innovative surgery developed at UCLA is giving patients back their lives: http://bit.ly/1JvszJK