(LOS ANGELES, California) – An experimental procedure involving an implanted spinal stimulator is showing early promise in helping paralyzed patients regain strength and partial use of their hands. “There currently is no effective treatment for spinal cord injury, and for those who lose function of their hands, any meaningful improvement a year after injury is extremely rare,” said Daniel Lu, MD, Ph.D., a neurosurgeon at Ronald Reagan UCLA Medical Center. “With this approach, however, we’ve seen encouraging signs even five years after injury.”

Dr. Lu became the first surgeon in the world to implant a 32-electrode stimulator near the top of a patient’s spine. The device bypasses the injury site and finds new, alternate pathways to deliver brain signals to a patient’s hands. “There have been other devices shown to help animals and help paralyzed humans move robotic limbs,” said Lu, “but this approach is unique. This device is implanted in the spine, not the brain, and is designed to help patients move their own hands.”

Patients also participate in ongoing therapy so scientists can fine-tune signals from the stimulator and strengthen newly formed pathways along the spinal cord. So far, initial tests in paralyzed patients have shown an increase in grip strength and finger motion by as much as 300 percent.

“We don’t expect them to recover fully,” said Lu, “but we are hopeful that we can help restore enough function to their hands that everyday chores – like brushing their teeth, tying their shoes or using utensils to eat – will become routine once again. If we can do that, it would help restore a sense of normality to these patients and make an immeasurable difference in their quality of life.” 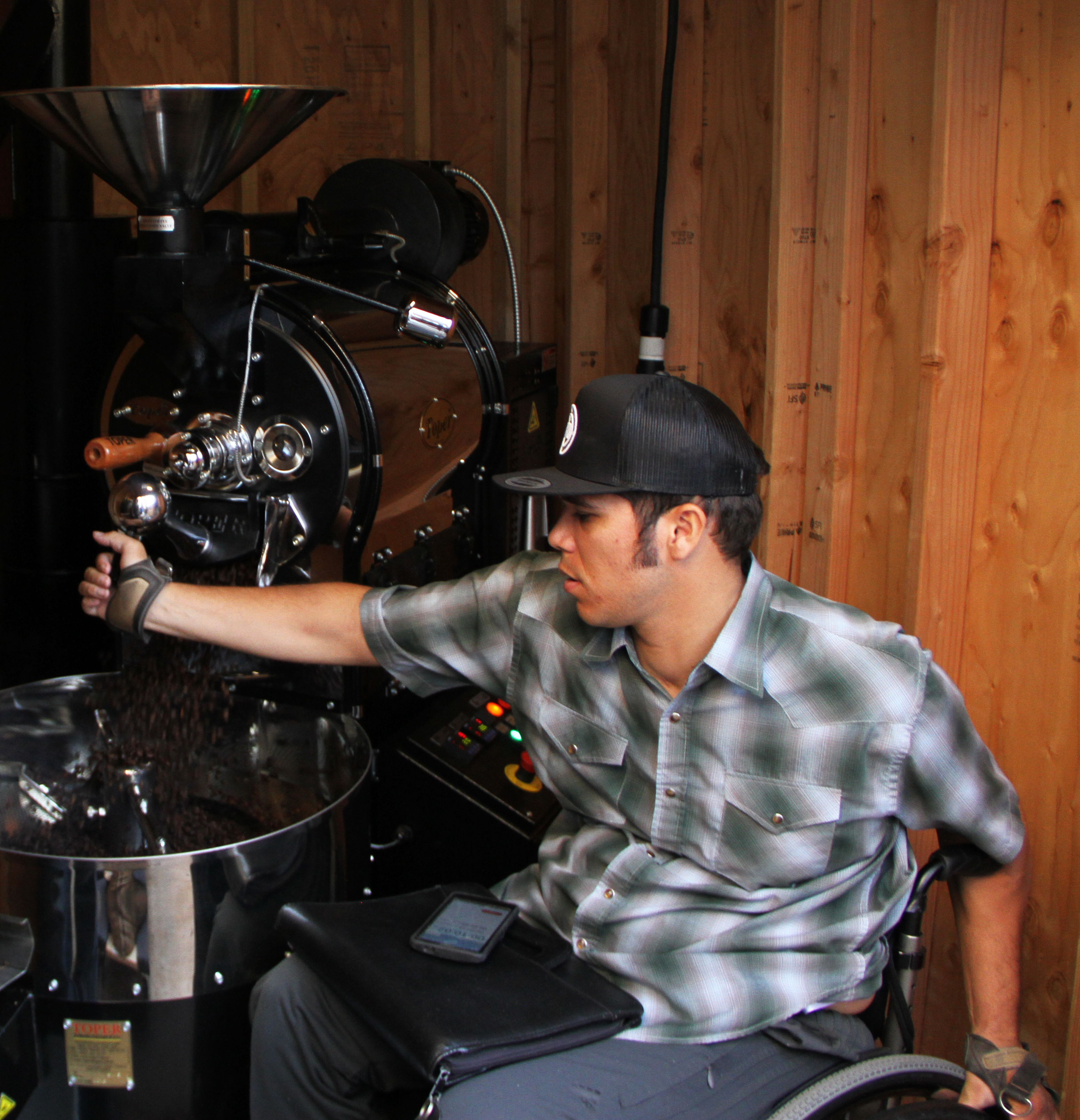 Brian Gomez roasts coffee beans at his home business in San Dimas, CA. After being paralyzed in an accident, Gomez became one of the first patients in the world to undergo an experimental spinal-stimulation surgery in an effort to restore partial function in his hands. 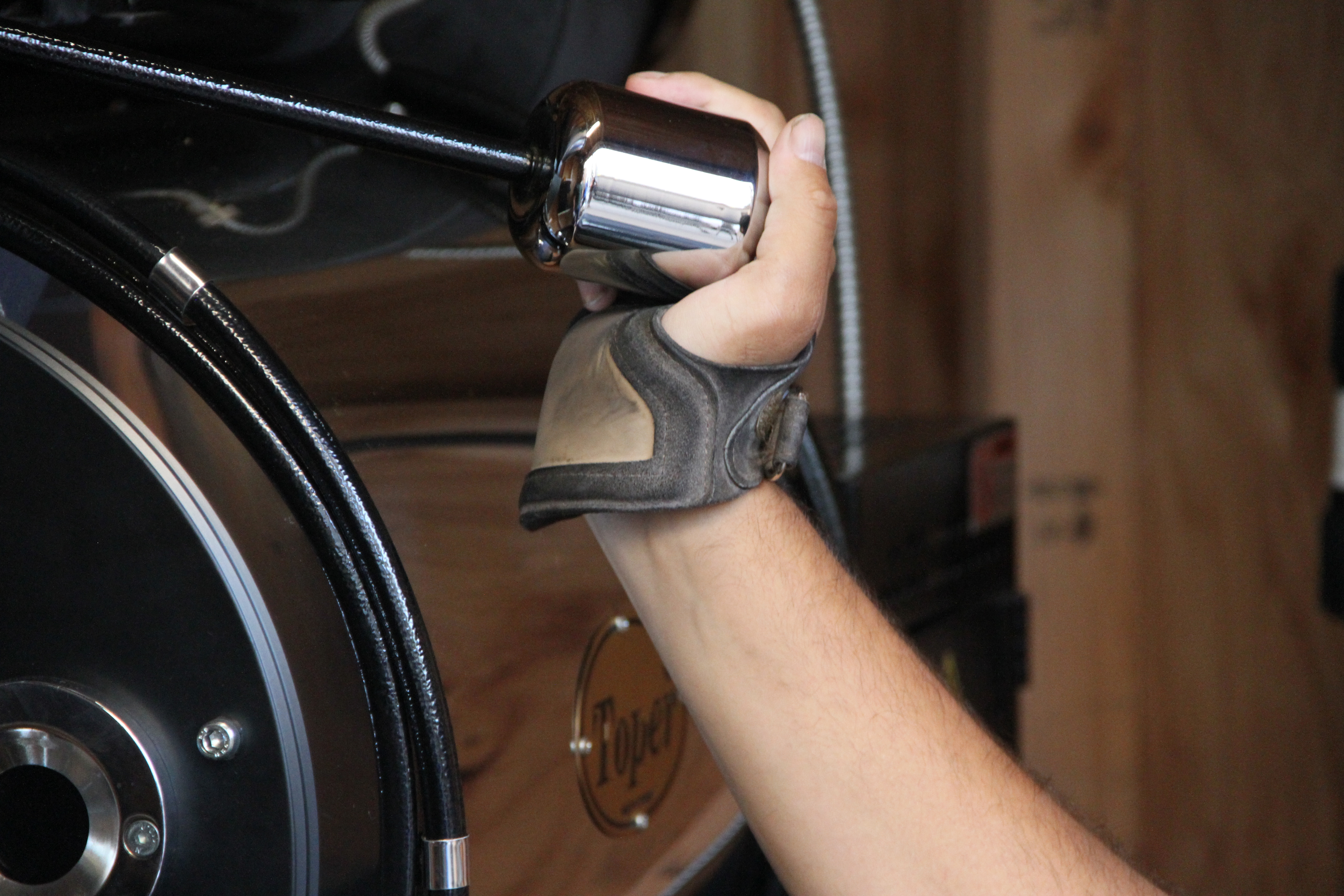 Since undergoing an experimental spinal-stimulation surgery at Ronald Reagan UCLA Medical Center, Brian Gomez has experienced significant increase in the function of his hands, which were paralyzed in an accident. The improvements are allowing Gomez to grow his coffee roasting business at his home in San Dimas, CA. 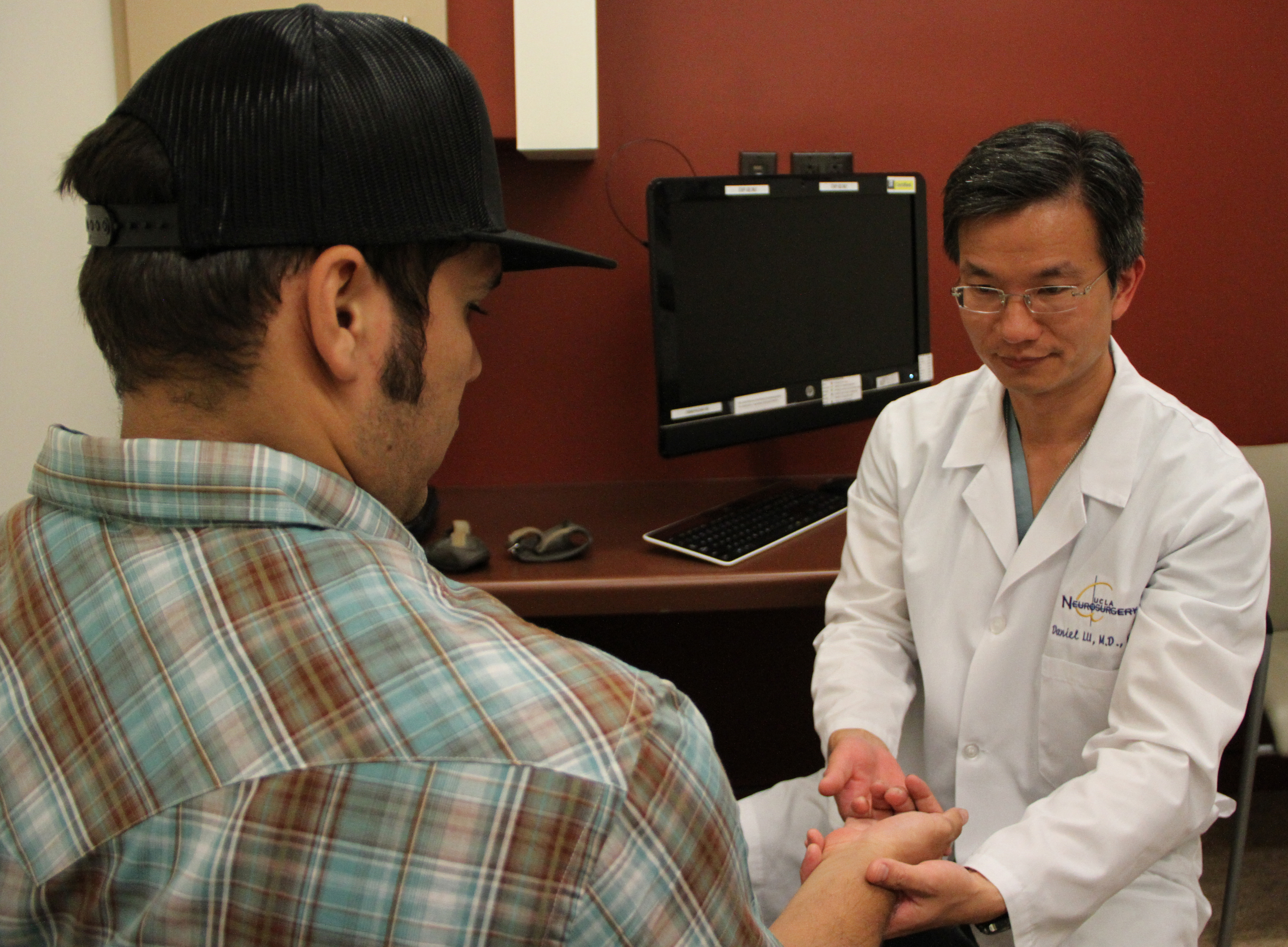 Dr. Daniel Lu checks the grip of Brian Gomez`s hands and fingers at Ronald Reagan UCLA Medical Center. After being paralyzed in an accident, Gomez was one of the first patients in the world to have an experimental stimulator implanted in his spine, which has led to a considerable increase in his hand function. 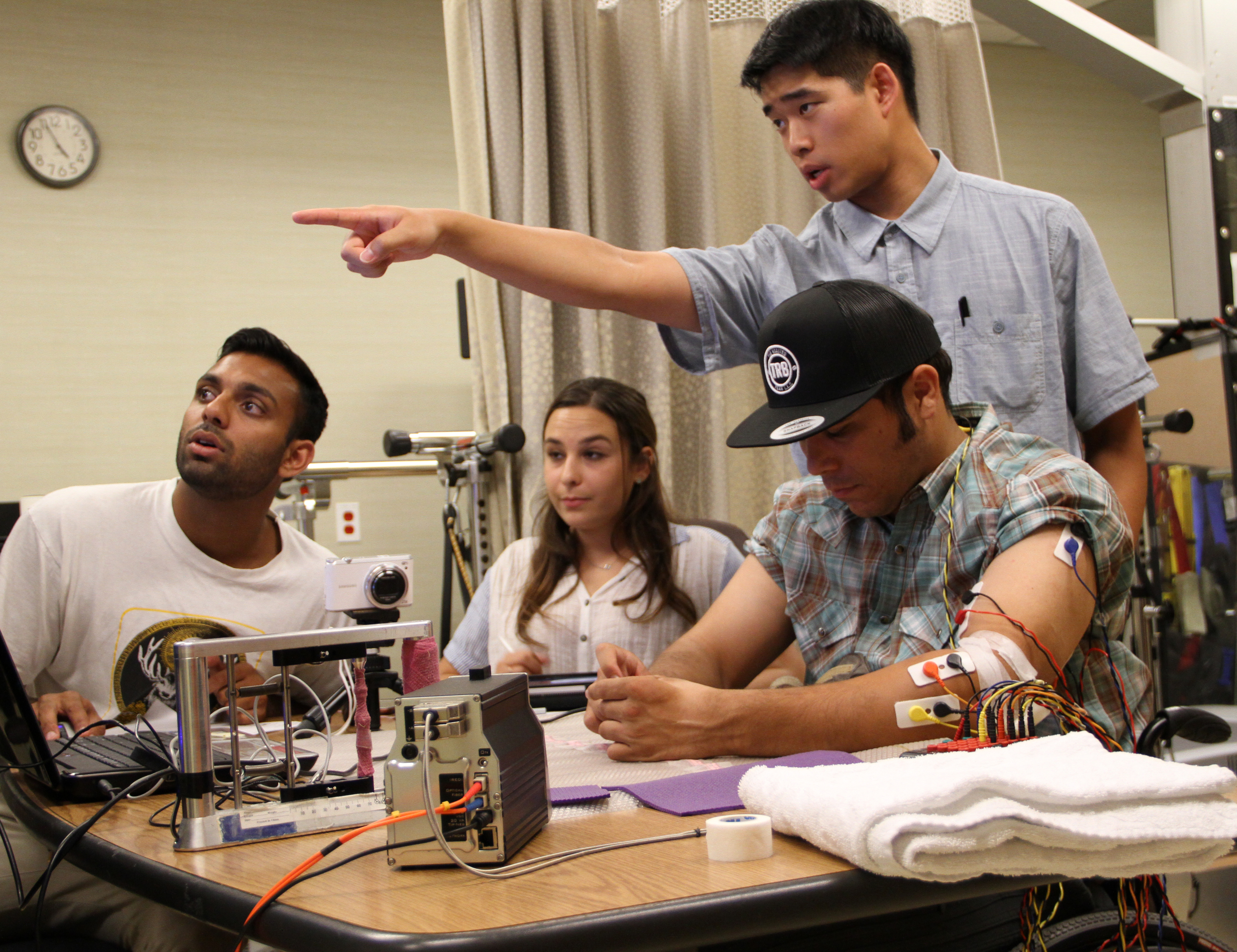 A team of researchers at Ronald Reagan UCLA Medical Center monitor signals from a stimulator implanted near Brian Gomez`s spine. Gomez is the one of the first patients in the world to get the implant, which has helped him significantly increase his finger motion and grip strength. 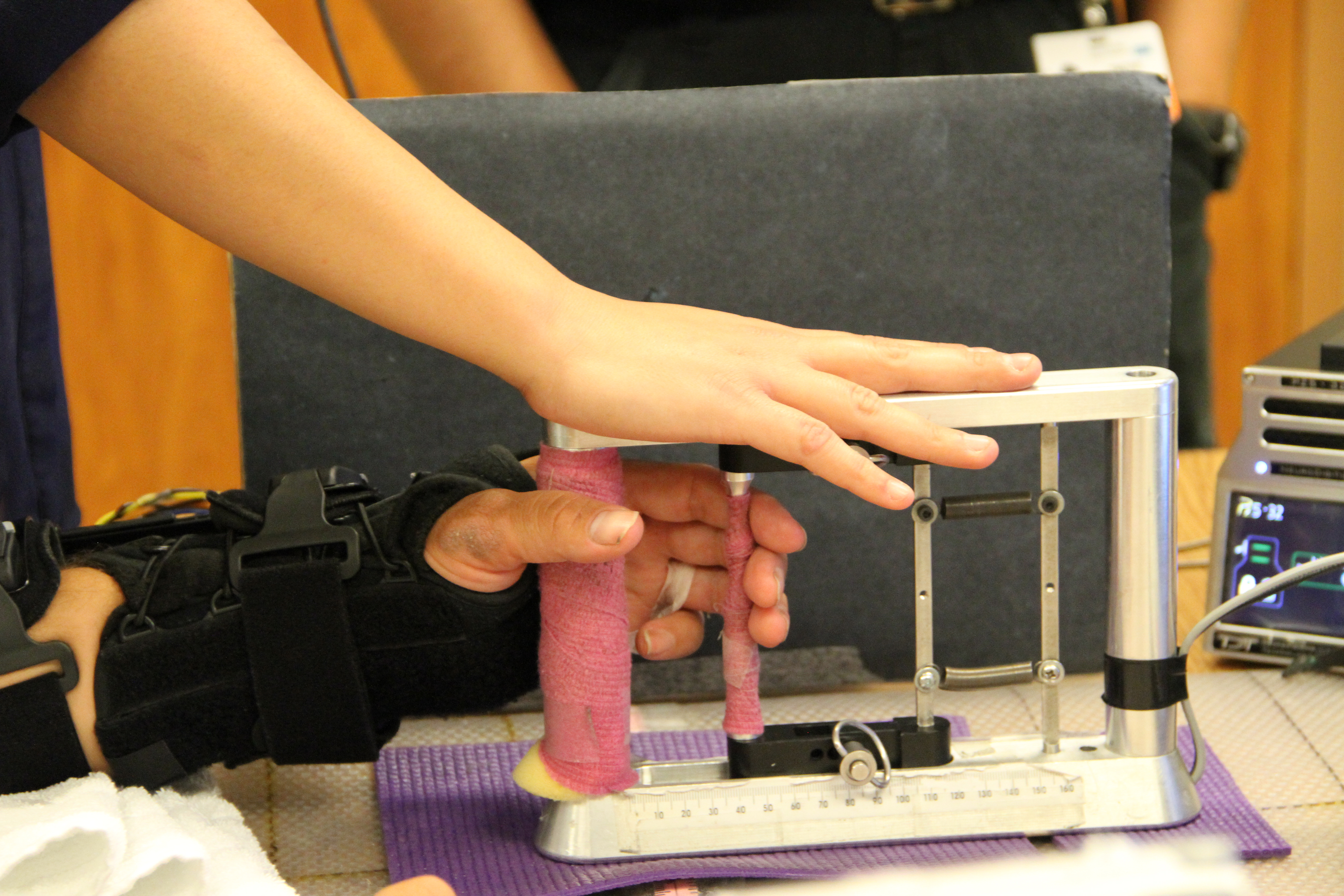 Brian Gomez undergoes rigorous therapy several times a week at Ronald Reagan UCLA Medical Center to fine tune an experimental stimulator implanted in his upper spine. The stimulator helps get signals from Brian`s brain to his hands, bypassing a portion of his spine that was damaged in an accident. 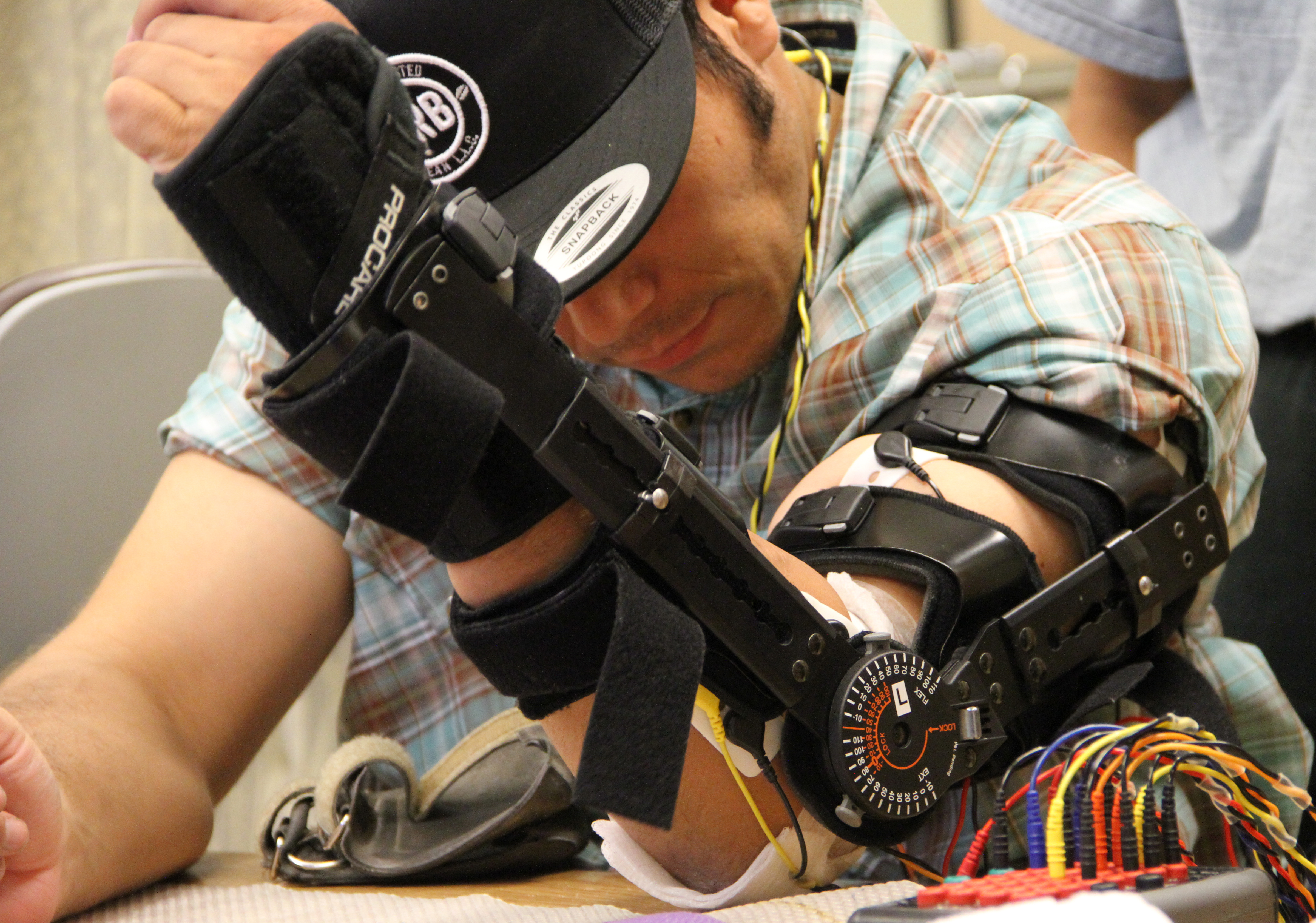 Brian Gomez works on building his arm strength during a therapy session at Ronald Reagan UCLA Medical Center. After being paralyzed in an accident in 2011, Gomez became one of the first patients in the world to have an experimental stimulator implanted near the damaged area of his spine in an effort to help him regain partial use of his hands.